The Sioux City Musketeers played their final regular season game of the year on Saturday. The Muskies qualified for post season play, so their season continues. Eventually the season will end for the hockey team. Eventually the highlights of the season will fade. However, for one little boy and his family, the memories will last much longer than for most fans.
Kamden Adams, son of Jamilynn and Marty Adams of Danbury, was named a Hot Shot for the March 28th game against Des Moines. The MVAO kindergartner and his family including his big brother, Kayden and his baby sister, Mal were given star treatment with a limo ride to the game. Along with receiving a Musketeer jersey, Kamden was able to meet the team and coaches in the locker room and posed with the Muskie's mascot, Charlie Battle. He also was able to hang at the player's bench during the warm up, giving him a pretty sweet view of the players on the rink. Finally, Kamden was part of the ceremonial puck drop.
The six year old said that he was excited when he learned that he was named the Hot Shot. He was a little nervous when he saw the crowd. His favorite part of the entire night?
"When I got to go on the ice with the lady," he said. The moment he was remembering was the puck drop during the opening events.
The Hot Shots program was created with the goal of honoring Floyd Valley Healthcare pediatric patients who have chronic health issues. Kamden has been diagnosed with Autism.
"We are excited to give the kids an opportunity to have a fun time with their family, cheer on the team and just enjoy being a kid again for a night," stated FVH via the Musketeer's website.
Photo by Jamilynn Adams, Thanks, Jamilynn!

There will be a lot more shopping opportunities in Danbury on Saturday. From 9:00 until 2:00 a vendor show will be held at the fire station. A vareity of goods will be for sale at this show, including cooking items, home goods, and women's wear.
Please pay a visit to the fire station's meeting room and see what there is to offer.

St. John's United Methodist Church in Mapleton will be holding their annual spring salad luncheon, but it year, like so many other fundraisers, it will be drive thru only.
For $8 you can get a chicken salad croissant, salad, and a cookie. The drive thru will be held from 11:00 until 1:00. Please plan on driving thru.

Prom is a time for juniors and seniors and their dates to dress up to the hilt and enjoy an evening with music. They get to take center stage for a few moments, walking arm in arm during the grand march. Everyone oohs and aahs over the beautiful dresses and remarks how nice the kids look.
This year will not be an exception, sort of. Instead of marching grandly in the high school gym, the students will be walking on Main Street in Mapleton between First Security Bank and Midwestern Land & Auction. In the event of rain, the march will go back to the school. This year the dance is also being held in the Mapleton Community Center from 8:00 until 11:00. The theme this year is Country Nights.
There will be additional activities going on before prom begins this Saturday. The FFA will begin their plant sales which will be on display. Student-made outdoor arches will also be able to purchase with those proceeds going to the junior class and the Foundation.
Beginning at 6:00 a food truck from Sweet Treats by K&B will hit the street. There will also be outdoor games and music.

Members of the MVAOCOU Drama Club portrayed fictional characters with real-life concerns when they performed "The Perfect Score" on Saturday. Four friends struggle with their future plans as they face the final months of their high school career. Hannah (played by Loryn Schultz) was a perfectionist who felt she couldn't study enough for her upcoming SAT test. Her goal was get in an Ivy League college. She feared that her friend, James (played by Noah Oberreuter) was not taking his future seriously and pressured him to study, study, study. James was the opposite of Hannah, questioning why he was being pressured to go to college instead of just entering the work force. Ivy (played by Katy Krohn) was the daughter of two parents straight out of the hippie era. She struggled with her parents' college dreams for their daughter and her own goals. Finally, Alex (played by Ben Schram) was in line for a soccer scholarship, but his grades were far from spectacular. Though his parents pushed him to study more, he was certain his athletic skills were all he needed. 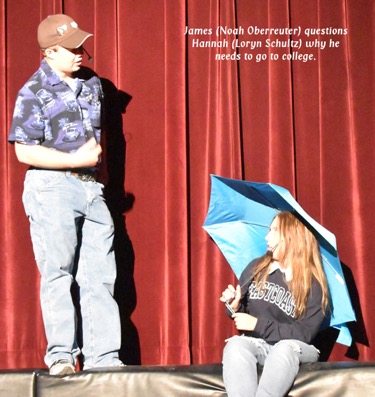 The students did a speculator job with their characters, and their supporting cast also played their parts well, making for a pleasant viewing for the audience.
Photos of the cast, stage crew (a very important aspect of the play), and the directors can be found in this week's Review. 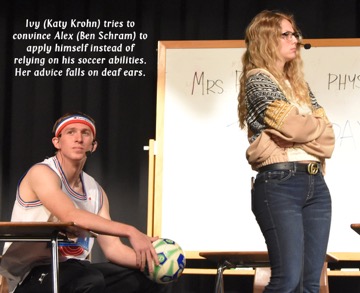 The Open Cupboard will be getting Farmer Friend Boxes on April 30th at 11:00 a.m.
The trailer will be parked across the street from St. Johns Methodist Church on south 7th street (by the

The Danbury Community Club is looking for perenniel plants to put in the post office garden on Main Street.
If you have day lilies (please, no orange) or any other perennials which

The Danbury Community Club is grilling hamburgers for the Wednesday, May 5th Community Club meeting. All members are requested to bring a covered dish for a potluck dinner.

After months of preparation, the second grade students from Danbury Catholic School and from St. Mary's Faith Formation program made their First Holy Communion on Saturday, April 24th. The students were under the

Chris Craig is a 2021 graduate from MVAOCOU. However, when his fellow classmates will be putting on their caps and gowns, Chris will be in Sioux City. Because of his commitment with the Air Force, he won't be able

Brady Seuntjens took command of the baseball mound in little league. He continued that command as pitcher in high school. He also showed his power with the bat in his hand. As a senior, this will

As the available doses of COVID-19 vaccine increase and all adults over the age of 16 become available to receive one, scams abound.
The latest involves the production

The 2021 session of the Iowa Legislature has entered the final stage. Both chambers are working on budget bills and sending them to the other chamber for consideration. This process can take as little as a few days when agreements

ONAWA, IOWA—April 26, 2021—The Monona County Farm Bureau board would like to see the number of farm equipment on road accidents dramatically decrease this year and is encouraging all Iowans

Provided by Justin Glisan, Ph.D., State Climatologist, Iowa Department of Agriculture and Land Stewardship
Although not unusual for this time of April, late-season measurable snow fell on multiple days during the reporting

Per City Ordinances 52.04 & 52.05, any property, including ditches, within the City, whether vacated or non-vacated, is required to be mowed by the 15th day of the month in May, June, July, August, September

Weather permitting, Ten Point is planning to restart the street work project they had started last year. Work will begin the week of May 10th. There isn't much for details yet. As the date gets closer info can be acquired from

It's not quite ball season, but it's really good to see little league teams practicing in anticipation of their first game. A year ago the ballparks were left empty thanks to a certain something