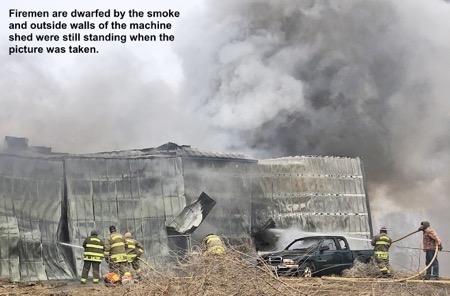 It was cold Friday morning. Very cold. At 8:00 a.m. it was a whopping 4° with a wind chill of -4°. Except at the Warren and Kathy Dirksen farm just east of Danbury. Around 8:00 a fire was seen coming from the machine shed, and Danbury Fire and Danbury Ambulance were alerted. Not too long after the call came in, white smoke could be seen looming in the sky while downtown. Minutes later the smoke was as black as the tires of the machinery in the shed. The fire raged, and Danbury Fire called for mutual aid. Before the blaze was calmed, firemen from Danbury, Mapleton, and Battle Creek's departments along with Woodbury County Emergency Services were fighting side by side to keep the fire from spreading to other buildings including the Dirksen's home which was under construction but nearly ready for the family of 6 to move into. The machine shed and the contents were a total loss, but the family feels blessed anyway. 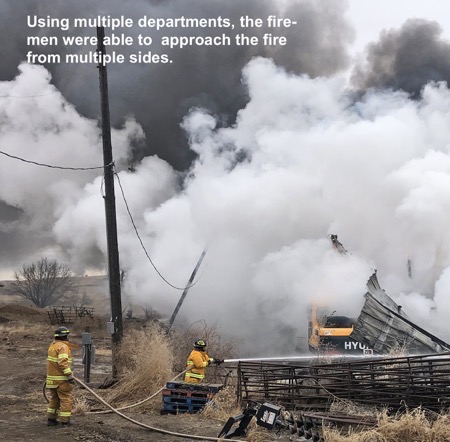 "We were thankful that no person was injured in the fire, although we understand that there may be a firefighter who was receiving prayers on the prayer tree," commented Matt. "The equipment can be replaced and so that really isn't important."
"This was a good reminder how so many people volunteer and drop everything that they are doing to help others when called," added Matt. "It was evident the amount of time these firefighters put in throughout the year with the speed and ability of their response."
Once the fire subsided and the fire departments had gone home, the Dirksens were left with a smoking pile of ruins. They weren't at all alone, though. Neighbors and friends stopped by and asked if they needed anything and even offered their equipment to help them out. The offers of help have continued in the days since the fire.
"Many others have reached out just to check in on us. We are so blessed to live in this small community that we do," said Matt. "We would just like everyone to know how thankful and grateful we are for all of them."
Photos by Matt Dirksen. Thanks, Matt!

DES MOINES, Iowa – State Treasurer Michael L. Fitzgerald is excited to start the year by sharing several new updates to IAble, Iowa's Achieving a Better Life Experience (ABLE) plan. "One major update is the annual contribution limit has been raised," announced Fitzgerald. "Now, account owners and their families can contribute up to $16,000 a year in their IAble account. That's an additional $1,000!"*
IAble, a program administered by Fitzgerald, provides individuals with disabilities and their support systems a way to save for disability-related expenses while still maintaining their eligibility for federal means-tested programs such as Supplemental Security Income (SSI) and Medicaid. Prior to ABLE plans, resource limits were capped at $2,000 if persons with disabilities wanted to qualify for monthly benefits. Money contributed to an IAble account can be used to pay for assistive technology, support services, basic living expenses, medical bills and more.**
In addition to the increase for the annual contribution limit, there was also an increase to the state tax deduction. Iowa taxpayers who contribute to an IAble account – not just the account owner – can deduct up to $3,522 from their state income taxes," said Fitzgerald. "When you help someone with a disability save for their version of a better life experience, you also get an added bonus of saving on taxes."
Since its launch, the plan has accumulated 1,430 accounts totaling over $12.8 million in assets.
"I am proud to administer a plan that helps persons with disabilities and their families save for necessary expenses that help to improve quality of life, health and independence," added Fitzgerald. "Providing them with tax advantages is just another added perk of IAble."
Visit IAble.gov for more information on the plan. Follow the Treasurer on Twitter and Facebook for updates and facts about IAble.

The Monona County Cattlemen's Association will hold their annual meeting and banquet this Saturday, January 15th at Ute Town & Country. Social hour begins at 5:30 pm with a steak dinner, catered by Staley's at 6:30 pm. The trophy auction will be held with entertainment and door prizes following. Tickets can be purchased at the door or in advance from one of the directors.

The St. Mary's Rosary Society will be meeting on February 7th at 6:00 p.m. Please plan to attend.

The Open Cupboard and Food Bank Siouxland, Inc. Mobile Food Pantry distribution will be Wednesday, January 19, 2022 at 1:00 p.m. at the Mapleton Community Center, 513 Main Street in Mapleton,Iowa.
The truck

December 17th was the MVAO FFA Annual Chili Supper. FFA members and their family received a great supper of Chili and Cinnamon rolls, that was made by the MVAO School cooks. After the meal was over, the Greenhand Degree was given

FFA State Officer, Mia Gibson visited the MVAOCOU High School on December 9th. It was a great experience for Mr. Wimmer's agriculture classes. They learned a lot about FFA and leadership.
Mia also had

On October 24th, the Ida Grove and Mapleton Bomgaars held a night of festive fun and shopping just for ladies! Bomgaars joined with Horn Memorial Hospital to raise awareness of women's health issues and passed along a 20%

Christmas came not only the homes in Danbury, but it also came to Cord Memorial Library. Two gifts were left under the tree, and on December 29th the kids of librarians Anna Grell and Melissa Steben opened the

Adalynn Ingram and Tucker Dean, children of Jayce Ingram and Braden Dean of Mapleton have reached quite a milestone. They have each read or been read to, 1000 Books Before Kindergarten. Adalynn got a book pillow which read