It's not what you know, it's who you know. A phrase used to explain how people achieve success. This phrase is accurate frequently, but just as frequently, you have to have some talent in order to achieve that success.
Angie Rosener has that talent. Angie Rosener also knows the right people to be able to share her talent. This knowledge and talent landed her a chance to rub elbows with some very influential people at President Donald Trump‘s rally held at the Des Moines airport. Not only would she get to meet many dignitaries, but she, for a few minutes, was front and center with all eyes on her and the American flag. Angie was chosen to sing The National Anthem at the rally which had 10,000 people in attendance.
"I'm so thankful for the experience I was given," said Rosener. "I got the idea to ask (to sing at the rally) because this past January, Denison High School choir teacher, Kandy Thompson sang for a rally. She inspired me to give it a shot, and I'm so glad that she did."
Rosener, a music teacher at Schleswig who teaches TK-8th grade vocal music and 5-8th grade instrumental music, contacted State Senator Jason Schultz from Schleswig and asked if they needed someone to sing The National Anthem for the Trump rally. Knowing Rosener as his daughters' former music teacher and a fellow parishioner at their church, Schultz put in the request, and an hour later, he let her know that she had the job if she wanted it. The person in charge of finding someone to sing the Anthem had planned to find someone to sing at that moment, so the timing was perfect. Rosener, with excitement and a little nervousness, reached out to her Facebook friends to share in her excitement and to put out the request for help with clothes, hair, and makeup. The response was overwhelming with numerous people offering clothes which would fit a patriotic theme. Angie Schrunk's dress was the perfect dress for the singer.
"I saw God's timing play out in front of me over and over throughout this whole experience," commented Rosener. "One of the greatest things about this whirlwind event is that I felt so much love and support from people reaching out. I have never heard one negative comment, but instead, words of congratulations from people with different beliefs and views."
Along with Schrunk's dress, Ashley Beeck rearranged her schedule to do Angie's hair and Daytona Jo Wehr did her makeup at Trendue in Ida Grove.
Angie had a small group of supporters who went to the rally with her. Her mom, Lynette Thies; aunt and uncle, Leann and Brian Henschen; and her cousin, Kimberly Stieler went to Des Moines with her. She and Lynette were seated in a special section to the side of the stage.
"We chatted with a few of the bodyguards, saw secret service everywhere, and the sharp shooters in the back. Former Governor/Ambassador to China Terry Branstad was in front of me, Governor Kim Reynolds and her husband, Kevin along with Lieutenant Governor Adam Gregg was behind me, as well as Senators, Congressmen, etc. It was surreal."
Soon, it was time for Angie to lead the crowd in the Anthem.
"It was super windy at that time, and my hair was whipping all over the place," she said. "At one point, I had a piece of hair fly into my throat and about gag me while singing."
Her moment in the spotlight over, Angie and Lynette sat in the front row for the remainder of the rally. The ladies danced to the music, laughed, took selfies, and had fun.
"An older lady and her husband behind us told me I did a good job singing, and I later found out that her son works in the White House and has daily briefings with the President," added Rosener. "I couldn't believe the company that I was in.
"Then the president arrived on Air Force One. What a grand entrance! I've never been to a rally before and had never seen a president before. It was an unforgettable night!"
Angie and her husband, John live in Mapleton. Their daughters, Ashley, Sara, and Jenna attend MVAO/MVAOCOU schools.
Photo by Lynette Thies. Thanks, Lynette!

Will there be trick or treating in Danbury? Will the current status of the world put a halt to kids dressing up to get candy? Well, not in Danbury!
Trick or treating will officially be held from 6:00 until 8:00 on Saturday, October 31st. Anyone household who wishes to hand out treats is asked to turn on an outdoor light. Trick or treaters are asked to only go to homes which have lights (or some other indication that they are participating if they don't have an outside light) during those hours.
Remember to all to watch for cars if you're wandering the streets and kids if you're driving the streets. 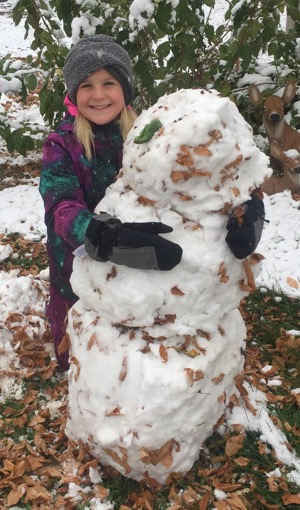 A real hard frost hasn't happened here yet, but the first snow did fall on Monday morning. A nice, peaceful snow fell the first few hours of daylight, covering the green grass with white snow. Roads were wet but not slick as the temperature hovered at 33°. By early afternoon the snow was done falling and had melted.
To the left, Bailey (daughter of Erin and Joe Allen) poses with her first snowfriend of the season.

After a Covid hiatus, the book club returns to Cord Memorial Library. The club will meet every other Thursday at 6:30. The first meeting will be October 22nd
All are welcome to join the book club!

Halloween is getting closer, and Cord Memorial Library could use some help decorating for the event.
Kids of all ages are welcome to visit the library (Tuesdays 12:30 - 6:00, Thursdays 10:00 - noon and 2:00 - 5:00, and Saturdays 9:30 - 3:00). There will be things to color to add a but of decor to the library.
Librarian Chantelle Hammer could use an extra pair or two of adult hands to help with other decorations. If your hands would like to help, use your legs to walk into the library and talk to Chantelle. She is planning to decorate on Thursday.

The MVAOCOU Pops Concert is the first concert of the school traditionally. The concert which had been originally scheduled for October 29th has been moved to Monday, November 2nd at 7:00 in

For over 15 years, Danbury and surrounding communities have been supporting the local blood bank, LifeServe Blood Center, at the Danbury blood drive currently coordinated by Marshall

Provided by Justin Glisan, Ph.D., State Climatologist, Iowa Department of Agriculture and Land Stewardship
Temperatures across the state over the reporting period varied from slightly cooler than average over portions

Recently National School Lunch Week and National Custodial Appreciation were held across the nation. Two jobs which aren't acknowledged much are given a spotlight and a chance to receive

Public Service
I occupy the only one of five seats on the Woodbury County Board of Supervisors NOT subject to an election this year. Why on earth would I be writing you a column right now? Hopefully the answer