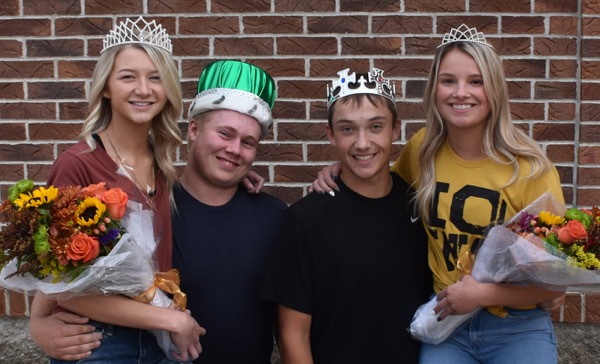 Gem City Queen Sophie Kruesen, King Noah Oberreuter, Prince Brady Seuntjens, and Princess Reese Petersen.
Corn Days was one of many events that was forced to cancel because of the threat of COVID. With activities unable to be included for Corn Days weekend, the committee had no choice but to call off the yearly celebration.
The Danbury Fire Department continued their annual event, a bags tournament (see below). The department also served supper in the evening.
It was at this part of their fundraiser that the Corn Days committee announced the Gem City royalty. Despite the lack of their celebration, the committee felt the desire to hold the contest. Perhaps, just perhaps it gave people a feeling of involvement.
Sophie Krusen, daughter of Karen Yockey and Gabe Krusen was crowned the Gem City Queen. Named as princess was Reese Petersen, daughter of Justin Petersen and Jodi Jacoby. Sophie took the honor with just 3 more votes, and Reese was just 6 ahead of the third place girl.
In the king contest, Noah Oberreuter, son of Angie and James Oberreuter was crowned the Gem City King. Brady Seuntjens, son of Hillary and Pete Seuntjens was named the king. Seuntjens beat out the third place boy by just 4 votes. It was indeed a close election this year.
Congratulations to the royalty.

Oto Ambulance Service wants to serve you a meal of a hamburger or hot dog, chips, beans and dessert. They are planning to serve the food - in take out containers.
The department will be serving take out on Sunday, September 27th from 4:00 until 7:00 p.m. at the ambulance building. Want to reserve your meals? Call 712-827-4400 and they will have your meals ready when you arrive. The cost is a free will donation.

St. Mary's/Danbury Catholic School will be having their Annual BBQ/Auction on Sunday, September 27th (rain date October 4th). Mass will be at 10:00 a.m., BBQ featuring grilled chicken sandwiches, burgers, brats, pulled pork sandwiches, chips, macaroni salad, ice cream bars and beverages begins at 11:00 a.m., live auction to follow at 12:00 noon. The event will be held outside this year. The forecast indicates it will be a lovely Sunday for an outdoor event.
Anyone wishing to donate an item for the auction, please contact Brian Seuntjens at 880.1211 or contact Janelle at the parish office at 883.2406.
A bill of sale can be found in this issue.

Homecoming is a time for school alumni to come home, share memories and update people on their lives, and enjoy a game of football. The big game brings people from all communities in this large school district together to cheer on the home team.
This year, Homecoming will celebrate the communities which make MVAOCOU great in a much greater fashion. The celebration begins on Sunday. Please check out the article on page 12.

Saturday was an absolutely gorgeous day. Plentiful sunshine and warmth was only deterred by a lot of wind. It just added a dimension to the Danbury Fire Department's bags tournament. Teams looking for something to do and hoping to win a prize gathered early Saturday afternoon for the tournament. As they lined the streets to toss the bean bags, family looked on and kids kept entertained being kids. One by one the teams were eliminated. They enjoyed the camaraderie of their fellow competitors on that beautiful afternoon.

SIOUX CITY, Iowa (September 22, 2020) –LifeServe Blood Center is asking community members to book an appointment to give blood at an upcoming area blood drive.
To help ensure the safety

Preschool Story time to resume at the Mapleton Library on Oct. 6. Story time will be on Tuesday mornings at 10 am and last about 30 minutes. Hand sanitizing and social distancing are recommended. Call 881-1312 with questions.

The Fisher Whiting Memorial Library in Mapleton will be hosting a children's program, Sandcastles and More. The program will be held Saturday Oct. 17 at 10 am. Story time will be followed by sand activities and end with kids making a

You are invited to join the Pro-Life Chain on Sunday, Oct. 4 from 2-3 pm at the Mapleton 4-way stop. This is a time of prayer and a peaceful stand to show respect for all life. Bring your own sign if you like, or we will have signs

4-H exhibits at the Iowa State Fair show the accomplishments of 4-H'ers. A virtual celebration of 4-H Exhibits, Communication Events, and Awardrobe Clothing Selection took place this year. With the Iowa State

(SIOUX CITY) – Woodbury County is looking for individuals to serve on the county's Planning & Zoning Commission and Board of Adjustment. Both bodies are required

Provided by Justin Glisan, Ph.D., State Climatologist, Iowa Department of Agriculture and Land Stewardship
Cooler and drier conditions persisted across the state through the reporting period as a quieter weather pattern

Dear Editor:
As we head into harvest, as a farmer, I would like to remind all drivers to please be on the lookout for farm machinery on the roads. A few simple tips can make everyone's drive safer:
•

Dear Editor:
I am a mom, consumer, and farm wife from Oto, Iowa. Each week I make my way to the grocery store to pick up groceries for my family. This is a task I take pride in, but not one that I view as simple. Each week I am faced

Homecoming is a time for school alumni to come home, share memories and update people on their lives, and enjoy a game of football. The big game brings people from all communities in this large school district together

Horn Memorial raised $17,170 from the 2020 Membership Drive. As earmarked, these funds were used to purchase 16 new mattresses for our Inpatient beds. These mattresses provide our patients the comfort they need