Arvin Herluf Kafton, age 78, of Mapleton passed away on Tuesday, January 10, 2023, at MercyOne Siouxland Medical Center of Sioux City.
Visitation and a vigil service were held on Friday, January 13, 2023, at Armstrong-Van Houten Funeral Home of Mapleton.
A Mass of Christian Burial was held at 10:30 a.m. on Saturday, January 14, 2023, at St. Mary's Catholic Church of Mapleton. Father William A. McCarthy officiated. Committal services followed at St. Mary's Catholic Cemetery of Mapleton.
The Armstrong-Van Houten Funeral Home of Mapleton was in charge of the funeral arrangements. Condolences may be sent online www.armstrongfuneral.com.
Arvin Herluf Kafton was born on December 21, 1944, to Herluf and Wilma (Tadlock) Kafton on a farm west of Mapleton. He attended school in Mapleton and graduated from Maple Valley High School in 1964. After graduation, Arvin joined the Army National Guard and served until 1970.
Arvin married his high school sweetheart, Carole Rauterkus, on October 16, 1965, at St. Mary's Catholic Church in Mapleton, where he was a member.
Arvin farmed his entire life in the Mapleton area. He was a man who enjoyed the simple pleasures of life, and farming was all he ever wanted to do. Besides running his John Deere equipment on the farm, you could find Arvin hunting, riding dune buggies and motorcycles at Timber Ridge, spending time with his family and friends, and camping. He was one of the many people that helped build the Rodney Pits into the Peter's Park that it is today.
Arvin is survived by his beloved wife Carole (Rauterkus) Kafton of Mapleton; three children: Terry (Stacy Brandon) Kafton of Mapleton, Brenda (Dan) Reimer of Danbury, and Brett (Jodi) Kafton of Mapleton; grandchildren Tammy (Riley) Kafton, Justin (Kelsey) Kafton, Toni (Darin) Specketer, Cady Helton, Riley (Dan TenEyck) Kafton, Sam Kafton, Brody (Karly) Kafton, and Bryce (Autumn Schreiber) Kafton; great-grandchildren Grace and Hope Specketer and Asher Kafton; brother Wayne (Zola) Kafton of Mapleton; sister Judy (Jim) Moore of Ft. Collins, CO; brothers-in-law Robert Rauterkus of Mapleton and Michael Schincke of Omaha; and sister-in-law Joan (Don) Heidzig of Aberdeen, SD.
He was preceded in death by his parents Herluf and Wilma (Tadlock) Kafton; son Troy Kafton; daughter Cindy Kafton; grandson Stephen Kafton; sister Arlene (Lyle) Woodward; sisters-in-law Diane Schincke and Donna Davis; and parents-in-law Gilbert and Helen Rauterkus.

Dorthy A. Sabasta, 88, of Sioux City passed away on Friday, December 23, 2022 at a local care center.
A Mass of Christian Burial will be held at 10:30 A.M. on Friday, January 13, 2023, at Nativity Catholic Church. Visitation with the family will be Thursday, January 12, 2023 from 5:00-7:00 P.M. with a Vigil Service at 7:00 P.M. at Meyer Brothers Morningside Chapel. Burial will be at Memorial Park Cemetery. Online condolences may be given at www.meyerbroschapels.com.
Dorthy was born on July 6, 1934, in Danbury, the daughter of Andrew and Leona (Boeche) Schimmer. She graduated from Danbury Catholic High School. While waitressing at the College Café, Dorthy met the love of her life, Walter Sabasta and the couple were married on June 19, 1955 at St. Francis Catholic Church in Sioux City. To this union, four children were born. Walter preceded Dorthy in death on June 16, 2012. Dorthy worked for Windcharger and Younkers before devoting her time and love to motherhood. She enjoyed bowling and playing cards and was an excellent seamstress, cook, and baker. Dorthy was devoted to her family and will be missed dearly. She was a member of Nativity Catholic Church and a former member of St. Francis Catholic Church. Dorthy loved everyone.
Survivors include her children: Steven Walter (Karen) Sabasta of Spirit Lake, Timothy Ray Sabasta of Sioux City, Michael Duane (Vikki) Sabasta of Sioux City, and Nancy (Scott) Cochrane of Sioux City; six grandchildren: Dayton Sabasta, Stephanie Bowder, Jack Morris, Sarah Blake, Christopher Sabasta, and Shelby Book; three great grandchildren; brother Richard Schimmer; and sister-in-law Annie Schimmer.
Dorthy was preceded in death by her parents, husband Walter, brother Don Schimmer, and sister-in-law Lois Schimmer. 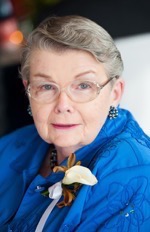 Reba Ann (Patterson) Benschoter, Ph.D., passed away at home on January 1, 2023. Her impact was felt by so many because of her generous spirit, quick wit, and the ability to call a situation as she saw it with candor and sometimes gentle humor.
She will be remembered as a wife, mother, grandmother, and great-grandmother as well as a friend, volunteer, and coworker. Reba was a master at finding the right dress pin to wear on any outfit for any occasion (including coffee on Thursdays), and her family members have fond memories of giving her additions to her collection. She will also be remembered for determination, steadfast faith and industry leadership in telemedicine.
Reba Patterson was born in Smithland to Glenn and Lorraine (Dunn) Patterson. The oldest of three children, she attended school at St. Patrick's Academy in Danbury. Reba graduated from Briar Cliff College and continued her education at Iowa State University. While working on her master's degree on using television in education, Reba met her future husband, Leon G. "Benny" Benschoter. The pair worked at WOI-TV on the Iowa State University campus until Benny took a position at KTVO in Ottumwa. It was not long before she and Benny married. Reba moved to Ottumwa, and their lives became intertwined both personally and professionally. Both of them proudly worked in the burgeoning television industry.
Following Benny to Omaha as he took a job at KMTV, Reba was looking for a job in psychology. Instead, she began her tenure at the University of Nebraska Medical Center (UNMC) in 1957 as an audiovisual specialist in the College of Medicine's Nebraska Psychiatric Institute (NPI). She worked in several teaching and directing positions before becoming the director of the communications division of NPI in 1962. In 1970, the Board of Regents created the Biomedical Communications Division and named Reba the director for the entire UNMC campus. In 1978, after seven years as a part-time graduate student and many long commutes to Lincoln, Reba received her doctorate from the University of Nebraska Lincoln. She became a professor emerita in 2000. Additionally, she was associate dean for the School of Allied Health Professions (SAHP) from 1985 to 1995.
Hallmarks of Reba's career at UNMC include pioneering telemedicine (long before COVID-19) and increasing learning opportunities and services in rural parts of Nebraska. In 1964, Reba became project director on the creation and operation of the first U.S. two-way closed-circuit telemedicine system. Recently, the Nebraska television project has been heralded as one of the first successful demonstrations in the blooming field of "telemedicine." Back in 1966, however, the term had not yet been coined. She was also active nationally in the development of these and other new technology applications, serving on councils, task forces, and government study committees. In 1991, Reba participated in the planning and implementation of NEB*SAT, a statewide satellite TV system for rural communication and education.
Reba and Benny were active members of the Health and Science Communications Association (HESCA) and she served as the organization's president in 1977. In 1981, the organization recognized both Reba and Benny with its highest honor for their service and achievement.
As associate dean for the School of Allied Health Professions, Reba increased professional programs and student enrollment to address shortages in allied health professional services. A program that was dear to her was the extension of health services to rural Nebraska through the Rural Health Education Network (RHEN).
Benny and Reba made multiple trips to China through Project Hope to share their knowledge of instructional technology in medical teaching. Through the Friendship Force Program, Reba and Benny traveled extensively abroad and hosted foreign visitors to the United States. There were no strangers at the Benschoter dinner table and the family often was extended on holidays to include those who had no family to share with.
Early in life, Reba was an accomplished photographer as evidenced by a collection of albums detailing the growth of her family and travels. Her artistic talent was evident in the homes she and Benny created over the years. She often had the ideas and Benny brought them to life through his own talent as a craftsman. Reba and Benny also enjoyed collecting the artwork of up-and-coming artists.
Reba gave her talents to many efforts. She mentored, taught, or hired dozens of people into the profession of which she was a leader. After Reba's retirement in 2000, she served as a member of the Executive Council for AARP Nebraska and Assistant Manager of the Nebraska AARP Information Center. She was active at the Stephen Center Homeless Shelter as a member of the Board of Directors and a long-time volunteer. As a 50-year member of Our Lady of Lourdes Parish, she served on the Parish Council and supported many other Parish projects and activities, and she was a longtime volunteer at Lauritzen Botanical Gardens.
Reba was preceded in death by Benny.
She is survived by her children, Brooke Ann Benschoter of Des Moines, Mary Lorraine Miller (Kevin) of Omaha, Brian Benschoter (Maureen) of Austin, TX, and Annmarie Rollag (John) of Omaha; grandchildren Alyssa Mehalick (Andrew), Michael Miller, Henry Benschoter, Megan Miller, Max Mowitz (Austin), Maddy Miller, Claire Benschoter, Lucy Benschoter, Dan Rollag, Benjamin Mowitz, and George Benschoter; and two great-grandchildren, Addison and Jack Mehalick. She also leaves behind cousins, coworkers, and church family members who were treasured friends.
In lieu of flowers and food gifts, memorial donations can be made to the Our Lady of Lourdes Parish Endowment or Briar Cliff University, Sioux City, Iowa, directed to the Glenn and Lorraine Patterson Scholarship Fund.
Visitation will be at the Heafey-Hoffmann-Dworak-Cutler Funeral Home, 7805 West Center Road in Omaha, on Sunday, January 15 from 5 to 7 p.m. with a rosary at 7 p.m.
Funeral services will be at Our Lady of Lourdes Church, 2110 South 32nd Avenue in Omaha, on Monday, January 16 at 10 a.m. with a lunch following.
Interment will be held at a later date.