September 1st at MVAOCOU
The Rams hosted a quadrangular to open the month of September.
For the night, Camryn Boyle led the Rams in assists with 20 while adding 16 digs and 10 serves. Emily Kovarna was the leader in kills with 13 while contributing 14 digs and 13 serves. The digs leader was Sidney Trucke with 22; Trucke also had 20 serves. The serves leader was Reagan Seuntjens with 20; Seuntjens tallied 12 digs. Brenna Mammen served over the net 6 times. Ashley Rosener got down and had 7 digs while Mya Goslar connected for 6 digs. Brylei Clausen had 5 kills and 6 digs. Rachel Allen served 10 times and assisted 6 times. Trista Ohlmeier used her height for 10 kills and her flexibility for 7 digs.

River Valley 3 - MVAOCOU 2
The Rams traveled north to Correctionville for a night of volleyball against the Wolverines. It was a great night with the teams playing all 5 sets to determine the winner.
Rachel Allen was the leader in assists with 33, serves with 26, and ace serves with 6. Allen also had 15 digs. Leading in kills was Emily Kovarna with 15. Kovarna contributed 14 digs. Trista Ohlmeier was the block leader with 5. She added 7 kills, 6 digs, and 14 serves to her career stats. The leader in digs was Sidney Trucke with 21. She also served successfully 12 times. Reagan Seuntjens recorded 18 digs and 15 serves. Ashley Rosener sent 10 serves over the net and had 7 digs. Mya Goslar pounded down 6 kills while Bryleigh Clausen celebrated 10 kills. 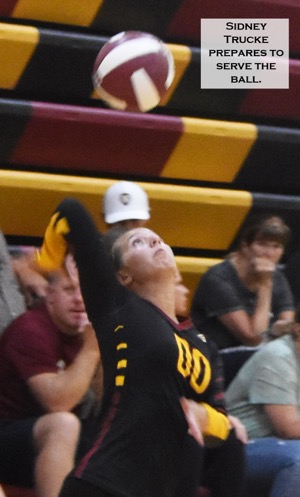 MVAOCOU 3 - Ar-We-Va 0
The Rams traveled to Rocket Territory on September 8th. The night was a great night for the Rams who took the three sets 25-13, 25-18, and 25-19.
Rachel Allen was the team leader in assists with 20, in digs with 11, and in serves with 15. Emily Kovarna was the kills leader with 9. Reagan Seuntjens tallied 5 digs and 14 serves. Ashley Rosener also had 14 serves; she contributed 8 digs. Brylei Clausen pounded down 5 kills. Destiny Widemon sent 11 serves over the net and kept 5 balls off the floor with 5 digs. Trista Ohlmeier took her height to advantage for 8 kills and also recorded 7 digs. 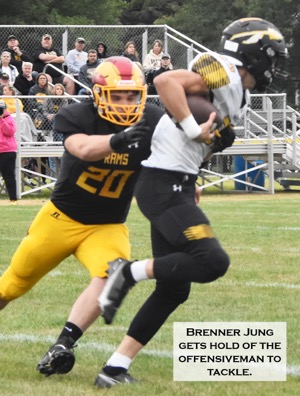 Cherokee 46 - MVAOCOU 14
The Rams had their first home game on Friday, a night to celebrate the seniors in football, cheerleading, cross country, and band.
The game started great for the Rams, with them getting first on the board about halfway through the first quarter. The Braves responded with a couple touchdowns and a 2-point conversion before the final whistle for the quarter. In the second quarter, the Rams were knocking on the door for a TD, but they were stopped on the 1-yard line. The Braves didn't keep the ball for long. Their first snap of the next series ended abruptly when the Rams inundated the Braves in the end zone, getting a safety. The game turned to the Braves' favor with a couple intersections grabbed by the guests. One intersection was oh so close to the end zone, but a tackle and time running off the clock turned it from a TD chance to halftime.
The Braves controlled the second half for the most part. The Rams did get another touchdown to give them double-digit scoring.
The Ram touchdowns were courtesy of a quarterback keeper, run by Ethan Kuhlmann for 10 yards, and a 4 yard run by Peyton Gress.
Leading the Rams in rushing was Luther Cameron with 105 yards spread over 16 carries. Kolby Scott was the reception leader with 26 yard in 4 catches. Kuhlmann had 3 punts for 64 yards.
On the defensive side, Tyler Ohlmeier and Jace Henderson combined for 1 1/2 tackles each which Peyton Gress Kolby Scott, and Koltin Linkenhoker were both credited with a tackle for a loss. Nick Collins, Kolby Scott, and Kane Boyle all shared the tackle leadership with 4 each. Boyle also jumped on a Braves fumble for his team.